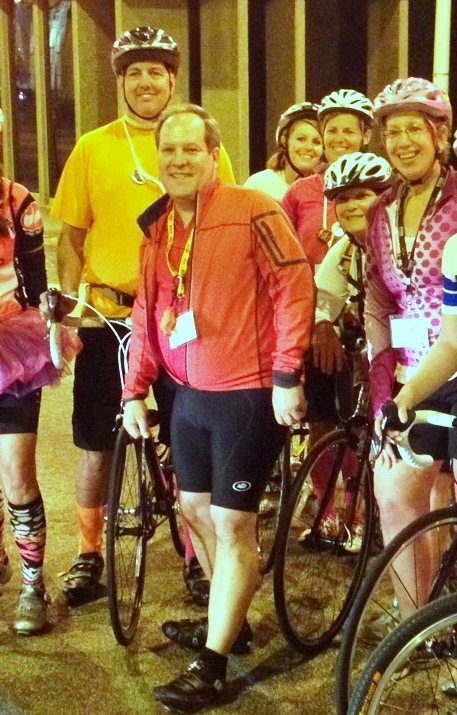 Greg and the Bike Crew before opening ceremonies in 2012

Greg first began his journey with the Atlanta 2-Day back in 2007. Buzz Glover (then Director of Route Services) and Randi Passoff (the founder of It’s The Journey) put on a lunch-and-learn event at the law firm where Greg worked, encouraging employees to volunteer at the upcoming Atlanta 2-Day Walk. That year, the 2-Day Walk was attempting to expand their crew by incorporating a bike crew to help monitor walker safety. Greg felt that this opportunity would be a great fit for him, since he had been participating in a similar activity with members through his church.

When he showed up at the walk on Friday night, he had no idea what to expect. Being the bike crew’s first year, it was a bit of trial and error. But being able to follow the walkers along the 30 mile route and getting to meet hundreds of new people walking the 2-Day and serving on crew was worth every hiccup along the way! The dedication of everyone present at the event had a lasting impression on him.

Following his first year crewing the 2-Day, Greg spent many hours into putting

together a written plan that could help the 2-Day better utilize the bicycle crew. His plan included implementing small teams and deploying the teams to rotating zones of coverage. After sending the plan to Buzz Glover in hopes that his ideas could be utilized in following years to make the bike crew more effective, Greg was surprised to get a call asking him to head up the bike crew for the 2008 walk so that he could carry out his plans. Greg accepted the position and served as Captain of the bike crew through 2012. Each year, Greg and his team puzzled out new ways the crew could improve the event.

Greg didn’t know what he was asking for when he told the Co-Directors of the Atlanta 2-Day that he would be willing to try out a new position serving the walk back in 2012. He was presented with the opportunity to become a B’Rest Stop Captain, and served that position for two years. His passion for leadership and willingness to try new things motivated him to become the

unofficial “B’Rest Stop Major.” Greg advocated for increased communication between B’Rest Stop Captains, envisioning that they would function more as a team than as individuals. This unofficial role allowed Greg to increase communication by supporting each of the Captains throughout the year long planning period.

For many years, the dedicated walkers and other crew members kept Greg motivated to come back to the Atlanta 2-Day year after year. After many years of serving the organization with no close ties to anyone with the disease, he was hit with a curveball. Last year, Greg’s mother was diagnosed and treated for breast cancer. His mother is currently in remission, but he is incredibly grateful for organizations such as It’s The Journey that do so much to help provide breast cancer services to people like his mom.

Greg’s selfless dedication to the organization was honored in 2016 when he was recognized at the 2-Day Walk dinner by being inducted into the It’s The Journey Hall of Fame. Greg was completely shocked, humbled, and grateful for the honor. He has been grateful to have the chance to ride hundreds of miles along the streets of Atlanta meeting hundreds of different people with hundreds of different stories.  If you are interested in learning more about the 2-Day crew, check out our website for more information.